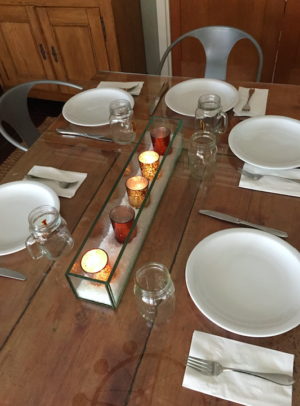 Family Values and Rituals: Are Our Kids Paying Attention?

I grew up in a home that had regular family dinners. My dad had a consistent job schedule and we had family dinner at 6:30pm every night. I also remember watching “The Brady Bunch” and “Knight Rider” before dinner and James Taylor, Simon and Garfunkel, and Carly Simon playing in the background while we ate. I remember eating our salad first, then the rest of the dinner.

Today I have a practice as a child – adolescent – family psychologist and I now know that there is proven research that family dinners are reliable predictors of both child health and adjustment. Good job to my mom and dad!

I remember when I learned about the benefit of family dinners during my professional training and of course I had no doubt that when I became a parent I would have family dinners. I guess I was paying attention when I was young because I thought about this before I was even married!

Fast forward years later and, sure enough, I was married and my wife and I had three children — all under the age of six. It was finally time for our family dinners! My wife and I were both raised this way and we both knew by this time that family dinners lead to healthy children and positive adjustment. We were ready and confident. We couldn’t wait to start our tradition.

But the universe had other plans. Our early family dinners were total disasters.

· Three kids getting in and out of their chairs — constantly

· Kids fighting, fighting, and fighting with each other

And of course an upset Dad. In fact I would be truly stressed because family dinners were “supposed” to be good experiences (right?) and if we didn’t have good ones then it would be bad for our kids. Thankfully, my wife had a much better perspective. “They aren’t ready yet,” she would say, “They are still young. We will have plenty of family dinners when they get older. We just need to go with the flow.” I was worried it would never happen and kept trying and forcing the situation to work. More total disasters. Finally we stopped. And I continued to worry: Will they ever understand that being together at dinner is important? What will their family memories be? How could we fail at this?

Fortunately, over time, meal by meal our dinners improved – and one day we realized we were actually enjoying these family dinners. We heard about our kids’ days, talked about what was going on in the world, and chatted about friends and family. My wife and I began to learn things we didn’t know by simply listening to our kids (especially when all three became teenagers!) talk about things from their own relationships with each other – relationships that didn’t include us – and so much more. We had it all figured out.

Just as suddenly as our dinners began improving and we had a real tradition – everything changed again.

Recently my wife went back to nursing two nights a week and our teens were alone and our family dinner schedule changed. Back to less family dinners again.

Fast forward to last week: I had a work dinner and my wife was working. We would both be home late. No family dinner — again.

That night I got home later than expected and I was shocked by what I discovered: my oldest teen told me (with a smile) that my youngest had prepared dinner, set the table, and all three of them as well as one friend had their own “family dinner.” They had fun, talked, listened, and cleaned up everything. My youngest daughter was smiling widely when I went to her room to ask her about the night and my own smile was wider than all three of my teens combined!

In that instant, I flashed back to the dinner days of crying, high chairs, and fighting. I remembered my worries and concerns that our kids wouldn’t embrace our family values and rituals. I laughed out loud because even amidst the flying food, the disruptive tantrums and constantly changing schedules our kids got it and finally so did I.

I literally heard what I tell my clients — do what is meaningful to you as a parent and what you believe is good for your family; try not to worry about the future; show your kids what matters in life by living it – and repeat all of these often. What we do (big and small) will make a difference in their lives and in ours.

And finally, yes the kids are paying attention — just like we did when we were the ones sitting around the dinner table.

Want more Dr. Dan? Sign up for our Parent Footprint Awareness Training today and learn how to model your best self and lead your children to success.